Skip to content
Detention Logs is an independent site that publishes documents and data about Australian detention centres. The first wave of data is a searchable database of 7632 reported incidents across immigration detention facilities from October 2009 to May 2011, as recorded by the private contractors running the detention centres. These events range from self-harms, assaults and escapes to electric fence failures, complaints and aborted deportations.
Across that time, there were 77 escapes, along with four incidents recorded as ‘escape – mass breakout‘ and 56 recorded as ‘escape – attempted’.
There were 98 demonstrations within detention centres, as well as hundreds of records relating to hunger strikes – labeled as ‘Voluntary Starvation’. There were also hundreds of incidents of disturbance and damage.

See The Everyday Violence In Our Detention Centres, New Matilda

As the Indonesian Government made plans to reduce fuel subsidies, social resistance broke out across the archipelago, protesters fearing that the price rise would cause knock-on rises in the cost of living that would have a devastating effect on the poorest. The government has wanted to make this spending cut for several years now, but popular resistance over the years has made it very difficult to push it through. This time, however, they seem determined. One action in Medan, North Sumatra on the day the decision was taken was met with a brutal response from the police, where hundreds were injured and 87 people were arrested. Nearly three weeks later 32 people remain in police custody although it remains unclear whether they are actually being prosecuted. Neither their families nor lawyers have had any access to the people who are still arrested, most of whom were seriously hurt. Also, 17 more people, many well-known faces from the student movement, have been placed on the police wanted list as supposed intellectual masterminds of the action. Here’s the full chronology, from a participant:

On the 17th June 2013, an alliance of students and citizen’s groups called BARAK took to the streets to show their solidarity against the government’s decision to raise fuel prices. END_OF_DOCUMENT_TOKEN_TO_BE_REPLACED 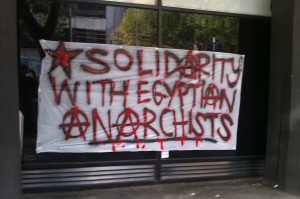 On the 6th of February in Melbourne, Australia, a small group of anarchists gathered outside the Egyptian Consulate building on Market St, CBD in response to an international call-out for solidarity actions in support of Egyptian anarchists.

On the 25th of January during protests to commemorate the 2nd anniversary of the Egyptian Uprising and the protests that continued in the days that followed; Egyptian anarchists took to the streets in large numbers and for the first time formed Black Blocs in Cairo and other major cities actively confronting the security forces and physically protecting other protesters who were coming under heavy attack by security forces & plain-clothed pro-regime elements.

Using rocks and molotov cocktails they bravely resisted the brutality of the security forces, inspiring not only there fellow revolutionaries but also inspiring anarchists and insurrectionists throughout the entire world. END_OF_DOCUMENT_TOKEN_TO_BE_REPLACED

September 16: Six men have been charged following violent protests in Sydney sparked by an anti-Islamic film.

Violent clashes erupted yesterday after demonstrators marched from Sydney’s Town Hall to Martin Place yesterday afternoon and confronted police outside the US consulate.

Some protesters allegedly threw glass bottles and other missiles at police, forcing officers to use capsicum spray during a melee that led to six police and 17 others being injured.

Seven men and one male juvenile were arrested, with six men so far charged with offences including assaulting police and animal cruelty, police said.

Six police were injured and 17 others were treated for the effects of capsicum spray following the protest. END_OF_DOCUMENT_TOKEN_TO_BE_REPLACED

Students at La Trobe university have been in occupation since August 23, in protest against planned cuts to Humanities and Social Sciences. After a demonstration and a brief occupation on August 13, the vice chancellor had emailed students to say that they could be suspended or expelled for participating in unauthorised protests. The University was particularly worried about the possibility of disruption to its Open Day, August 26.

At the Open Day, the vice chancellor had to escape a student protest ambush by using an underground tunnel network at the campus. END_OF_DOCUMENT_TOKEN_TO_BE_REPLACED

Up to 60 people on Saturday afternoon protested against the fatal shooting of 34 striking miners by South African police.

A letter with the words “blood on your hands” was left on the consulate door for South African President Jacob Zuma.

Former anti-apartheid activist John Minto said protesters were disgusted with Mr Zuma over the killings which occurred on Thursday at the Lonmin platinum mine at Marikana.

“We protested vigorously against apartheid, only to find economic apartheid has replaced race-based apartheid,” he told 3News.

“So the people of South Africa are no better off.”

July 29: On Friday afternoon, a child was shot dead and at least two other residents were critically injured during a clash between police and residents of the village of Limbang Jaya in South Sumatra.

The incident took place close to the grounds of the Cinta Manis [“Sweet love”] sugar factory, and was said to have occurred as part of an ongoing land dispute in the area.

National Police spokesman Sr. Comr. Boy Rafli Amar said that the violence was provoked by residents hurling rocks at a police vehicle following up on a case regarding stolen goods that belonged to [Cinta Manis].”

The Mobile Brigade (Brimob) vehicle was passing through Limbang Jaya when residents began to hurl rocks at it. Police say they fired a warning shot and tear gas, then fired into the crowd when residents became more violent.

An elementary school student, Angga Fadli bin Mawan, 13, was shot in the head, and died immediately, according to the Commission for the Disappeared and Victims of Violence (Kontras). END_OF_DOCUMENT_TOKEN_TO_BE_REPLACED

A group of anarchist demonstrators wearing mask, around 30 individuals, (with black clothes tied on in their face) unpredictably showed up from Aurora Avenue, Cubao Quezon City staging uncompromising rebellion against the State of the Nation Address or SONA.

Circle A black flag was waved in the air, along with green and black and red and black flags that symbolizes an ever-expanding expression of solidarity in the struggle for radical social change and liberation that are inclusive for all common people and every walks of life not solely amongst activists circles and political movements.

Along the intersection of EDSA and Aurora Avenue, anarchists protestors reclaimed the streets, blockaded and stopped the flow of traffic where cars and busses unable to resume in more or less 15 minutes. Three big banners were stretch to the public eye to every commuters and passersby saying Kalayaan, Kapayapaan at Pagkapantay-pantay (Freedom, Peace, Equality), Estado at Kapitalismo Terorismo sa Kalikasan at Sangkatauhan (State and Capitalism Terrorism to Nature and Humanity), Wasakin ang Kagutuman, Itigil ang Pagpapautang, Pagkain para sa lahat (Abolish Hunger, End Debt, Food for All). END_OF_DOCUMENT_TOKEN_TO_BE_REPLACED

Recently, 3000 victims of the mud volcano created by the Lapindo company’s drilling operations, whose homes were in the affected area, once again demonstrated their feelings outside the East Java Governor’s office in Surabaya. They were asking the provincial government to lend money to PT Minarak Lapindo Jaya so the company would be able to pay the compensation money it owed. The demonstrators came from places inside the designated affected zone, for example Renokenongo, Siring, Jatirejo and Glagah Arum villages in Porong district, and Kedungbendo and Ketapang in Tanggulangin District.

The people were demonstrating because they felt the government’s actions had been discriminative. People living outside the designated affected area had already been awarded compensation, but they had not. That’s why they were urging Governor Soekarwo to agree to loan PT Minarak Lapindo Jaya (MLJ) 600 billion Rupiah.

Disturbances broke out during the demonstration. Furious that Soekarwo would not meet with them, they pulled at the barbed wire fence and bombarded the police with sandals, sticks and stones. The police then broke up the demonstration by firing a water cannon and tear gas towards the mudflow victims. END_OF_DOCUMENT_TOKEN_TO_BE_REPLACED

DISACCORDS
Create a free website or blog at WordPress.com.