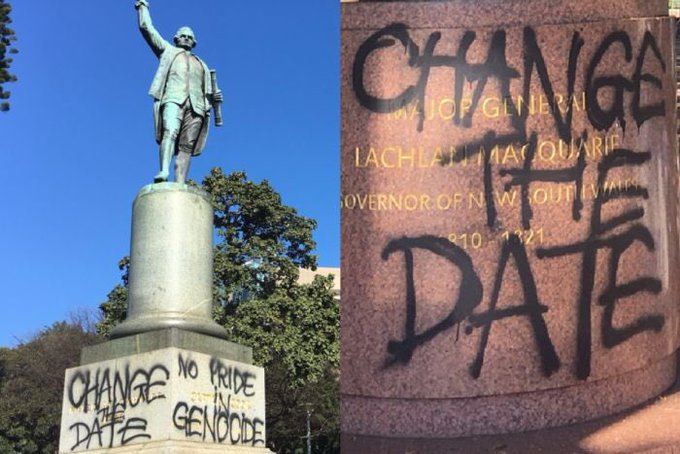 26 Aug 2017 – Early on Saturday, three statues in Sydney’s Hyde park – including one of Captain Cook – were attacked by vandals.

The words “change the date” and “no pride in genocide” were spray-painted on the Captain Cook statue, the former a reference to a campaign to stop celebrating Australia’s national day on the date the First Fleet landed.

Similar words were scrawled on a monument to Lachlan Macquarie, the fifth governor of New South Wales, and a statue of Queen Victoria was also targeted.

“But it is also part of a deeply disturbing and totalitarian campaign to not just challenge our history but to deny it and obliterate it,” Turnbull said.

“This is what Stalin did. When he fell out with his henchmen he didn’t just execute them, they were removed from all official photographs – they became non-persons, banished not just from life’s mortal coil but from memory and history itself,” he said.

Police have launched an investigation into the “malicious damage” in Hyde Park, which they believe happened between 2am and 3am on Saturday.

Australia has been engaged in intense debate this week over an inscription on a statue of explorer, Captain James Cook, in Sydney’s Hyde Park. The statue’s inscription claims Cook “discovered” Australia, prompting criticism that it ignored tens of thousands of years of Indigenous history.

The assistant immigration minister, Alex Hawke, who is vehemently opposed to changing the date of Australia Day, condemned the attack.

“This disgraceful extreme attack on our history &culture is shameful.” he tweeted on Saturday.

While debate raged in the media, many in Hyde Park remained oblivious to the controversy over the statue on Saturday.

One tourist lying next to the statue on Saturday said he was unaware anyone had been on the continent before the Europeans. Another was unaware of Australian Indigenous history. 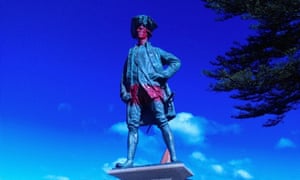 Black Nations Rising (BNR), published by Warriors of the Aboriginal Resistance, is a grassroots Aboriginal magazine dedicated to the cause of decolonization and self-determination.  Our publication, launched in January 2015, promotes symbols, stories and strategies of indigenous resistance and revival.  We have published two editions of BNR so far, and will publish another two this year.
1st edition  http://is.gd/dCdOMI
2nd edition  http://is.gd/iqR4NE

Published independently, BNR receives no government or corporate funding. The magazine is operated by a small but strong group of Aboriginal volunteers:

With the help of several unions, universities and Aboriginal organizations, we managed to print and distribute over 3,000 copies of Black Nations Rising issue one. It was distributed at rallies, via the Brisbane Aboriginal Sovereign Embassy (BASE) Food Program, and posted out to several hundred subscribers. As we believe Aboriginal media is an essential service for our people in pushing for social and political change, the magazine is free for Aboriginal people. We ask non-Aboriginal people to pay a $50 yearly subscription fee to help subsidize the postage costs.

Our goal is for Black Nations Rising magazine to turn into a monthly print publication with a circulation of 10,000 copies each issue. In order to do this, we need the financial capacity to enable consistent printing and distribution. To gather and produce the content necessary for a monthly magazine, we need the money to provide basic wages for a skeleton staff. We’re aiming to raise $50,000 to cover operation costs for 2016.

The Aboriginal print media landscape has deteriorated dramatically over the past few years. Tracker magazine was axed in 2014, and the National Indigenous Times (NIT) shut at the start of 2015. That’s two of the three major Aboriginal print publications gone, and both were active in promoting an Aboriginal rights agenda. BNR was established in an effort to fill the void left by Tracker and the NIT. But we also intended BNR to break new ground as a fully independent platform for the free expression of marginalized Aboriginal views and ideas, with a heavy focus on the views and opinions of young Aboriginal activists. Our publication was never meant to be separate to the Aboriginal movement. In fact, BNR was set up to be an organ of the movement.

A new era of Aboriginal activism dawns, and with it comes the need for strong independent Aboriginal media to echo its calls, to bolster the anticolonial agenda. Our movement and media must be one and the same. Black Nations Rising is a publication of the movement, by the people, for the future. We hope you can support us in building this publication into a powerful force for positive change.

Yours in the cause,