This morning, refugee supporters from the Whistleblowers, Activists and Citizens Alliance (WACA) have hung a banner reading “Border Force Tortures Refugees – Deportations = Death” off the Channel 7 building in Melbourne’s Docklands precinct to draw media attention to the plight of refugees in on and offshore detention.  Channel 7 itself is not a target of the action, rather the Channel 7 building is in a direct line of sight of the Border Force headquarters in Customs House, where operational matters in Manus Island and Nauru refugee detention camps are managed.

WACA spokesperson Zianna Fuad said “The federal government and its refugee detention industry contractors have again sought to avoid being held to account with their proposal to settle the Manus class action compensation case out of court. WACA has staged this action to call on the Federal Government to repeal the Border Force Act, evacuate the camps immediately, bring them here and end the illegal indefinite detention of refugees”.

“In proposing the settlement, the government denies all liability for the mistreatment and false imprisonment of people on Manus Island. Some of the claimants themselves have asked, what good is a few thousand dollars when they remain in unsafe conditions and in fear of deportation back to the danger that they fled? What good is hush money to people denied freedom and safety?”

By holding people in detention, the Australian government is breaching the international human rights of asylum seekers. Article 14.1 of the United Nations Universal Declaration of Human Rights states that “Everyone has the right to seek and to enjoy in other countries asylum from persecution”.

“We can’t rely on the politicians, nor on the legal system that has been effectively bypassed. It is up to us to act to stop business as usual until the government closes the camps and safely re-settles the people it has illegally detained and tortured.”

“There will be no justice and no business as usual for the Government and their private contractors, until the asylum seekers and refugees held as political prisoners in Australia’s immigration detention centres are safely resettled”, she added.

Today’s action is a continuation of two shutdowns of Border Force by members of WACA, where they called for the sacking of Minister Dutton and the closure of all onshore and offshore detention centres. WACA is working alongside many other groups and individuals in Australia to bring justice to refugees that have been unfairly detained in horrifying circumstances and is demanding that the Government dismantle its offshore detention camps
For media comment on site

**This event takes place during Refugee week. We maintain that every week is Refugee week until there is no need for people to seek asylum.** 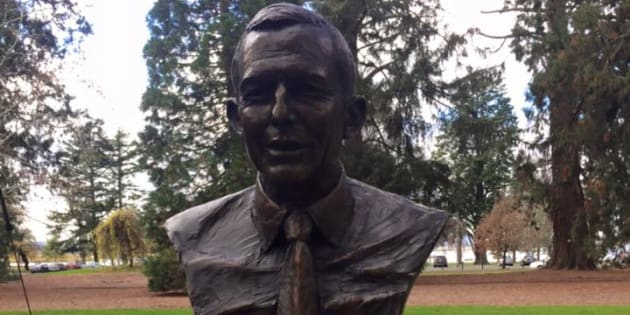 21 June 2017 – The Ballarat Botanical Gardens is home to “Prime Ministers Avenue”, a walking path which features busts of every Australian PM.

Its latest addition, a sculpture of Tony Abbott, keeps getting vandalised.

Prime Ministers Avenue opened in 1940, after a donation from the former Member for Corio, Richard Crouch. It features busts of 28 Prime Ministers, from the nation’s first leader Edmund Barton all the way to Abbott — current PM Malcolm Turnbull has not yet had his likeness added to the installation.

Abbott, the nation’s 28th Prime Minister, unveiled his bust just a few weeks ago, on June 5. It came after the sculptor, Linda Klarfeld, told Fairfax Media “it wasn’t an easy one” because “attractive people are hard to sculpt because it’s hard to make them look real.”

But having lived in the Prime Ministers Avenue for just a fortnight, Abbott’s bust has been the target of a string of vandalism and mischief.

Earlier this month, Ballarat mayor Samantha McIntosh criticised the vandalism, telling The Courier newspaper “there should be absolute respect for the position of prime minister”.

“Any of the prime ministers from over the years of Australian history have worked exceptionally hard on behalf of the community and been voted in by many thousands of taxpayers,” she told The Courier.

“Vandalism, graffiti and rude behaviour should not be tolerated. There is a cost associated each time someone tampers with ratepayer and taxpayer funded infrastructure.”

Shaun Davidson, 33, from Perth was sentenced to one year in Kerobokan last September for immigration offences after he used another man’s passport.

He is among four foreign prisoners who allegedly made a brazen escape on Monday sometime after 6.30am, police said.

It is believed the four made a dash for it through a tunnel found behind the jail’s medical clinic.

“The tunnel is about 12 metres (39 ft) long and we suspect it took more than a week to build,” prison chief Tony Nainggolan said, adding that police had launched a search and believed the men were still in Bali and not far from the prison.

Davidson’s photograph, along with his three fellow escapees, have been circulated around Bali as police attempt to find the men.

All the men are serving time for various offences at Kerobokan’s Bedugul block.

Dimitar Nikolov Iliev, 43, from Bulgaria is serving a seven-year term for money laundering, and alleged fellow escapee Saye Mohammed Said – a 31-year-old from India – is serving a 14-year sentence for drugs, police said.

Davidson has just two months and 15 days left of his sentence to serve, at which point he would have faced deportation.

He also has a warrant out for his arrest on drug offences in Perth.

13 June 2017 – Four men and one women were charged on Tuesday with attacking police as they forcibly removed inhabited sheds from an illegal “squatter” settlement along a stretch of roadway in a township northeast of Myanmar’s commercial capital Yangon, a local police official said.

Authorities charged the five under the Highways Act for attacking police with slingshots on Monday during the shantytown’s demolition in Hlegu township to make way for a high-rise residential project.

The Highways Act governs the regulation of traffic on public roads and in public places and the preservation of the surfaces of such roads and places.

“They’ve been charged by the highway police for blocking the road and attacking them,” said Maung Oo, deputy commander of the Hlegu police. “No other charges have been made against them.”

About 200 Myanmar police officers and 1,000 others hired by the Yangon government on Monday evicted hundreds of settlement residents and dismantled roughly 4,000 illegal homes in the township along the Yangon-Naypyidaw Expressway about 30 miles outside the commercial hub.

One policeman was injured in the melee, Reuters reported.

Residents have objected heavily to the destruction of their homes, accusing village officials and others of fraudulently selling them their plots of land, and complaining that they have not been compensated for the loss of their homes.

In August 2016, authorities notified the shantytown’s residents that they were living in the area illegally, and issued them reminders almost every month thereafter.

The demolition operation marked the second time that squatters have been cleared out of Hlegu township following the leveling of the area in 2015.

This time, authorities, who are removing the structures without the use of bulldozers or heavy equipment, said they will make sure that the landowners do not return.

The destruction of the shantytown, which is still in progress, marks the first forced eviction under the civilian-led government of de facto national leader Aung San Suu Kyi, which has been in power since April 2016.

Forced evictions were common in the five decades Myanmar was under military rule.