Aotearoa Indymedia: Letters to Taame Iti and Te Rangikaiwhiria Kemara can be sent to:

A paint bomb attack against the Indonesian Embassy happened May 24,
2012 in the vicinity of Makati, Philippines. Around 1am a group of people started to throw a black paint to the wall and inside the perimeter of the said embassy. After that they left leaflets on the scene stating:

FREEDOM TO EAT AND BILLY,

FREEDOM TO ALL THE VICTIMS OF STATE REPRESSION,

INDONESIAN STATE IS THE REAL TERRORIST.

May 25: A GROUP of people – including six juveniles – who were cleared over the so-called Yamba riots is suing the New South Wales Police for millions of dollars in compensation.

A police truck was torched, another badly damaged and officers were pelted with bricks on an industrial estate just outside the north coast seaside town during a Valentine’s Day party in 2010 that attracted a mob of more than 100 people.

But when the case got to court, the adults were all acquitted and the police withdrew all charges against the juveniles after a magistrate criticised the police case as “too unreliable”.

May 24: Taame Iti and Rangi Kemara were sentenced to two and a half years in prison. Urs Signer and Emily Bailey had their sentences adjourned but will be sentenced to nine months home detention.

The four were found guilty in May on a number of firearms charges but the jury was hung on the more serious charge of ‘participation in an organised criminal group’. They were the only people brought to trial after 20 were arrested in 2007, when over 300 police carried out dawn raids on dozens of houses across the country.

The sentencing judge said one of those involved held extreme anarchist views and there was talk among the participants of killing, using explosives to kill, and attempts to “smash the state”.

Around 100 people gathered outside Mt Eden Prison in Auckland the evening after sentences were handed down. A demonstration is planned outside of Wellington High Court this Friday (25 May) at noon. Another protest will take place at Mt Eden Prison on Saturday 26th May at 2pm, and in front of the Christchurch Central Police station this Saturday (26th May) at 4pm. END_OF_DOCUMENT_TOKEN_TO_BE_REPLACED

Workers against work: A domestic worker in the western Singapore town of Choa Chu Kang pleaded guilty in court today (May 22) to mixing her menstrual blood into a cup of coffee she had prepared for her employer.

The incident reportedly occurred last year; no motive for the crime was given. The 24-year-old Indonesian woman who goes by the name Jumiah had been working as a maid for a year prior to the coffee “mischief.”

She now faces a maximum sentence of one year in prison, as well as a large fine. Her employer, meanwhile, faces a lifetime of making his own coffee. END_OF_DOCUMENT_TOKEN_TO_BE_REPLACED

Negasi: The two combatants in Yogyakarta, Billy Augustan and Reyhard Rumbayan (Eat)  finally returned to stand trial for the eighth hearing. The trial was held on Tuesday, May 15, 2012. Billy & Eat were sentenced for 1 year 8 months.

Both comrades had been in prison since October 7, 2011, shortly after the successful attack on the capital property. END_OF_DOCUMENT_TOKEN_TO_BE_REPLACED

May 13: MORE than 600 people have gathered outside Broome police station in the Kimberley in a showdown with authorities over a proposed gas hub.

An estimated 250 police with riot gear started arriving in the coastal town on Friday night in what residents say is a pre-emptive move to clear protesters from the controversial James Price Point gas hub site 60km north of town.

Residents said they feared police would move in as early as Monday morning to physically remove protesters from the Woodside Petroleum site, as a Wednesday deadline looms for a Broome Shire move-on notice to clear camps in the area.

“The community is feeling like they’re in lock-down here,” a Broome resident, who did not wish to be identified, told AAP today. END_OF_DOCUMENT_TOKEN_TO_BE_REPLACED

Hidup Biasa: In recent years, much of Manado’s shoreline has been turned into a commercial strip of shopping malls and entertainment venues, ‘reclaiming’ the coastline by building out into the sea. Apart from destroying the marine environment, where coral still grows even on the city’s shore, the habitat loss also threatens the livelihoods of traditional fisherfolk, displaced by the new leisure and tourism economy. Here are reports from two recent uncompromising actions to reject the latest of these developments. 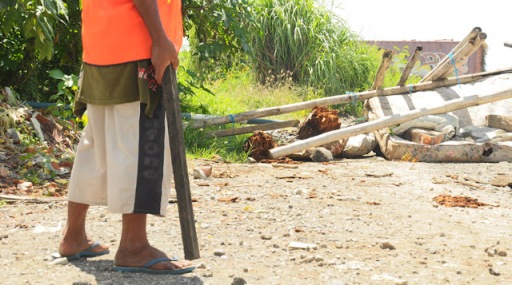 Around 20 people calling themselves the Anti-Authoritarian Fraction started an occupation at 18.00 on Sunday 22nd April 2012 and continued until 08.00 the next morning when they were forced to disperse by the police. The occupation, which managed to delay construction work, took place along a stretch of Manado Boulevard next to Manado Town Square. END_OF_DOCUMENT_TOKEN_TO_BE_REPLACED

May 9: A man accused of disorientating a police helicopter pilot during an alleged laser attack from his front lawn will remain in custody despite despite denying the charges.

The helicopter was supporting local police in the Leumeah area, in Sydney’s southwest, when the laser allegedly struck it four times at an altitude of 450m. END_OF_DOCUMENT_TOKEN_TO_BE_REPLACED